Thoughts and reactions from our meeting with Highways England 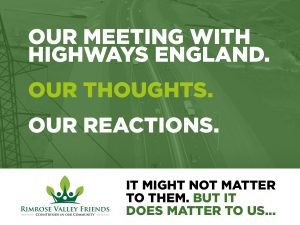 As you may know by now, representatives from Rimrose Valley Friends met with Tim Gamon and Carl Stockton from Highways England on 26th February.  No set agenda, but we certainly wanted a discussion about their plans, the Judicial Review, their environmental commitments, their concerns for public health, their reason for ignoring public opinion, whether alternative routes had been explored, whether working with Port of Liverpool had been explored.  Ahead of the meeting, we made clear the direction we’d like the discussion to take, rather than it being a conversation about improved cycle routes and ‘mitigating the effects’ of ploughing a dual carriageway through a country park.

In turn, they said they ‘wanted to make sure we had all the facts needed to contribute to the discussion’.  Slightly patronising perhaps?  But, we met them anyway…

Well, they gave us their facts, and it’s disturbing reading.

On the Judicial Review: Their lawyers have essentially said to ‘carry on as planned’ whilst this progresses.  They don’t see it as an obstacle.  They’re confident their lawyers will sort it.  It doesn’t matter to them.

For example, as we shared yesterday, part of the planned staged works is to start drilling boreholes in the valley in March.  Sefton Council has refused permission.  They said they’ll seek legal powers to access the land and do it anyway.  They’re not bothered about Sefton Council, or public opinion.  It doesn’t matter to them.

Why the rush?  Well, they have to start the building works by 2020, or the funding for the dual carriageway isn’t guaranteed.  Hence, it’s full steam ahead in the opinion of Highways England.  Literally, they intend to plough on.

On environmental concerns and public health, versus simple economic benefits, it got even scarier.

Highways England justify what they spend on schemes by calculating cost benefits and value for money only.  The benefits of improved journey times for example are factored into a calculation they call a Benefit Cost Ratio.

A tunnel, they said, wouldn’t bring their Benefit Cost Ratio in line with their targets.  We asked whether other factors are part of this calculation.  Factors like public health, environmental health, the impact on the natural environment perhaps?

‘No’, they said.  Those factors aren’t part of their calculations.  It’s just about money.  We even asked whether their opting for a surface road was partly based on it being faster and cheaper than a tunnel?  ’Yes’, they said.  Everything else?  It doesn’t matter to them.

On the subject of Port of Liverpool, and specifically Peel Ports, we asked whether there had been any dialogue on their potential investment in access schemes to the port.

Then they said that Peel believe that ‘they had invested enough’ in the region and weren’t prepared to offer any more in terms of costs.  Costs that will directly benefit their port.  We intend to give Peel a right to reply to this.  However, meeting with them is proving to be far more difficult than we’d imagined.

So, whatever happens, UK taxpayers will have to foot the bill for improving transport access to a vastly wealthy, privately owned UK port operator.  It doesn’t matter to them either, it seems.

“Right, let’s talk mitigation” said Highways England.  We said that’s not what we’re here to talk about. Tim Gamon didn’t seem to hear us.  He talked about raised banks hiding the motorway from view.  About improved cycle paths.  And that everyone’s last chance to have their input on mitigation would be during the planning consultation hearing in October.  In other words… accept that the road is happening, engage with us now, or get what you’re given.

Now we know how Highways England plan to go about things, we need to take action.  In many ways.  And we need that action to be intense and continuous and growing.  We plan to hold demonstrations and events.  Join us and be angry.  Our social media activity and online presence will grow and increase in regularity.  Join us there and share, shout your opinions, and be angry.  Visit our campaign Facebook page, visit and follow our campaign twitter feed.  Take part, join in, and encourage others to do so too.  There are thousands of Rimrose Valley Friends out there, with your help there can be tens of thousands more.

It doesn’t matter to them.  But it does matter to us.  Now’s the time to prove it.