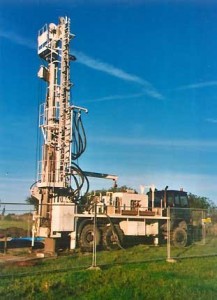 On Monday 21st September 2015 Atkins, the consulting engineers commissioned by Highways England, will start a digging and drilling exercise at several sites in Rimrose Valley to understand more about what’s under the ground.  This exercise will take place over several weeks and it is part of the investigation process that will help Highways England to decide next year whether they will build a road through Rimrose Valley or whether they will make modifications to the A5036, Dunningsbridge Road and surrounding areas, instead.

This digging and drilling exercise will comprise several “Borehole samples” where, using a giant drill, the quality of the ground 10 to 15 metres below the surface will extracted and analysed; and there will also be several “Window samples” where, by means of digging a contained area to a depth of around 5 metres, further samples will be taken.

Rimrose Valley Friends is a voluntary organisation set up to protect Rimrose Valley for the benefit of the communities who use it and also the biodiversity within. Its two separate wetland areas are recognised as areas of special local biological interest meaning they’re a valuable natural asset and of national interest.  Rimrose Valley cleanses the air that we breathe and it enriches the lives of many, those who visit Rimrose Valley and those who don’t. We assert that a road will negatively impact on the emotional, mental and physical needs of our local communities.  A road will therefore reduce the quality of life for thousands of people, with increased ongoing NHS and social care costs required to compensate for the negative impact caused.

The Friends and Members who are Rimrose Valley Friends are opposed to the prospect of a road being constructed through Rimrose Valley and our strategy is to build a case that will ensure the full and true costs, both from the outset and ongoing into the future, are fully considered and understood. We hope and anticipate that these costs as well as the actual construction costs will make a road through Rimrose Valley too expensive to be tenable.

We know that years after Whabbs Tip was decommissioned, millions of pounds were invested into Rimrose Valley to bring it back to life.  In summary, a very thick 5 metre deep substrate of soil was put on the surface of what was once Whabbs Tip, and it was crafted it into the beautiful, healthy, environmentally significant and safe oasis that it is today. However historically Rimrose Valley was a municipal tip and as such poses major road building challenges to Highways England.

We have a core team who have put a huge amount of effort into researching the history of what’s happened to Rimrose Valley over the last hundred years.  We have learned that whilst it was known as Whabbs Tip and it was used as a landfill site, record keeping was poor and it’s not officially known what was dumped or where on the land.  Furthermore, we’ve learned that for years before it became an official municipal landfill site, local industries routinely used Rimrose Valley to dump hazardous waste without records and without regulation.

Whilst totally harmless when buried metres under the ground as is now the case, large amounts of this landfill will have to be removed before a road can be built.  To remove and re-site the landfill will be an extremely hazardous and very expensive exercise.  Using official records where available and both local knowledge and personal accounts from people who worked on or used Whabbs Tip, we’ve been able to estimate that there is in the region of 3.6 million tonnes of such landfill.  Furthermore, we’ve presented evidence that suggests the structure of the clay substrate below the landfill is likely to have been damaged by alkaline pollution caused by the unauthorised dumping of waste materials from the local tanneries before the tip was formally opened.  If this is found to be true then it will also have to be safely removed and re-sited.

Neither Atkins nor Highways England want ‘unexpected surprises’ that would push up the costs and construction timescale of any road in an uncontrolled way, so by presenting our findings we’re contributing to Highways England and Atkins being able to make a fully informed decision that we hope has the potential to make the cost of building a road through Rimrose Valley too complex, intrusive and costly to remain viable.  We held the meeting on the 7th September, ahead of the ground survey analysis, so that we could explain what we think they may find and where, so they can have the chance to site their drilling and digging rigs accordingly.

Drilling and digging starts at defined sites throughout Rimrose Valley on the 21st September 2015.  It will last for several weeks, although the date the sites will be cleared and closed isn’t known as Atkins don’t know how long it will take to complete the exercise – it depends on what they find.

Once the ground sampling process is concluded later in 2015 the data will be analysed and further environmental and social analysis will take place.  We’ve been told that this will include monitoring the use of Rimrose Valley by the public to see how widely used it is as well as interviewing samples of people.

We’ve been told that the public consultation will be brought forward to spring 2016.  This replaces the previously stated timescale of October 2016 or later.  During the public consultation Highways England will present a number of options to the public for them to comment on.  All the comments received in addition to the outputs from the detailed environmental and economic assessment will assist Highways England in making a recommendation to the Secretary of State as to which option should be taken forward as the preferred option. Once the preferred option is announced a further consultation will be required to allow the Planning Inspectorate to decide whether planning consent should be granted for the preferred option. Only then can Highways England commence with any construction.

One of the aims of Rimrose Valley Friends is to remain accurately and honestly informed of all news and developments with the road feasibility study so that we can pass this information on to the users and communities of Rimrose Valley.  Highways England, Atkins and Sefton Council seem to be open and communicative with us and we want to keep the relationship positive so that they will continue to communicate openly.

What will Rimrose Valley Friends do next?

We will stay in close communication with the authorities so that we can remain clear of the facts and plans to follow.  As we learn more we will communicate it through our website and for people who are signed up as Friends, via email.

The next big cost consideration will be the emotional, health and wellbeing impact on the communities.  The more people actively use and enjoy Rimrose Valley, the more people will realise the benefits it gives them and the more they will want to speak up for it.  We will continue to run our community events in Rimrose Valley to encourage people to meet their beautiful countryside space and make it a part of their lives.

We will soon be announcing a date for a Public Meeting.

What can you do to help?